This falls under the banner “IoT? We’ve been doing that for years.” 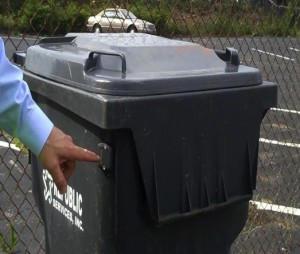 Like many cash strapped cities across the country, The City of Philadelphia was trying to plug holes in the annual budget by any means necessary. In addition to the standard process of targeting wasteful spending, they were also looking for areas where people were skirting the law by not paying taxes and licensing fees. One of the areas where they discovered they had an opportunity was in stepping up their efforts related to regulating dumpsters within city limits.

The Dumpster Problem in The City of Philadelphia
In Philadelphia, dumpsters in the public right of way require an annual, renewable license from the Department of Licenses and Inspections. Based on the dumpster size and use the annual fees range from one to five hundred dollars per year for each dumpster.  According to city records, there were only 2,231 dumpsters in the entire city.  Given that almost every restaurant, business and apartment building has a dumpster, it was pretty safe to assume that there were a significant amount of unregistered dumpsters.  A quick inspection found that there were thirty-two dumpsters on a single block.  That means six percent of all the dumpsters in Philadelphia are located on that one street which seems highly unlikely.

Enforcement of dumpster laws had been an extremely cumbersome process. To check to see if a dumpster was properly registered inspectors from the Streets Department had to call back to their home office to verify the registration of a dumpster they are inspecting in the field. The city had evaluated several options but determined the “best fit” solution would be using hand-held mobile Radio Frequency Identification (RFID) readers with durable RFID tags (they call them “Medallions”) affixed to the dumpsters.  Dumpster licensees were provided with instructions on where to get the tags and how to affix them to a dumpster and streets department personnel were provided with hand-held RFID readers.  Once the system was in place the inspectors could instantly check on the registration status of a dumpster by pointing an RFID gun at the tag.  If a ticket needs to be issued for a violation of a dumpster law, such as if a dumpster was overflowing with trash, using the RFID gun, the violation would be recorded instantly and the information would be sent back to a processing center and a ticket would be mailed to the violator.  Since most RFID guns have the capability of capturing images pictures could be taken in case the violators claims that their dumpster was not overflowing with trash.

To date over 20,000 dumpsters have been tagged with “Dumpster Medallions” to support this initiative.

Green Incentives
Now that the tag system has been deployed the city is looking at leveraging that investment in other ways.  Estimates indicate that the city as a whole generates about 300,000 tons of organic waste each year, about half of which is food waste.  The city is now moving forward with a plan that encourages restaurant owners to turn their food waste into compost rather than just throwing it into a garbage disposal.  Restaurants can now use a separate dumpster just for food waste that would be turned into compost.  Most typically those dumpsters are aerated dumpsters, meaning they are self-contained and don’t allow odors to escape.  Some of the food waste dumpsters also have capacity gauges, so that the restaurant would potentially have to empty it less often saving money on disposal fees.  As an added incentive the price for the medallion for a compost dumpster is lower than that of a regular dumpster.

So how is this IoT?
As indicated in the first line of this post, many projects that are years old can now fall under the IoT banner.  This particular application includes RFID tags, mobile RFID readers, legacy systems, and the potential for analytics.  The city now has much greater visibility of how and where dumpsters are being used around the city and is now able to move forward with programs such as the composting incentives mentioned above.  It is an example of connecting the real world with the virtual world and, at this point, is fully buzzword compliant.

So if you happen to be walking around the city of Philadelphia and spot a dumpster, which is actually pretty easy, then take a look for the RFID tag.  That’s a real world production IoT application at work.