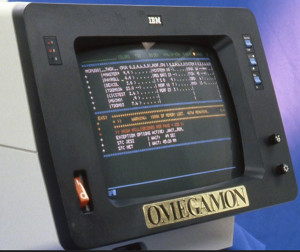 In the early days of my career I worked as a systems engineer for Fortune 100 companies running IBM mainframe systems. These were the days when the mainframe “was” the system, and if it went down the entire company was down. The mainframe operating system and the various subsystems like transaction management, databases, batch processing, etc., all needed to be monitored constantly. If we got any indication there was a problem we immediately looked to tools like IBM’s OMEGAMON to identify the problem and begin working on a resolution. Sometimes that meant re-routing workloads to another logical partition or recycling a CICS region. The largest monitors in the data center were reserved for these tools and they were invaluable. At the time the company “data center” was in a single physical location so all of the “systems” were in one building. In today’s world that is rarely an option.

It has been a long time since I have had my hand in such matters but as I write this I am having flashbacks of running through a cubical farm to get to operations to start researching a problem.  I cannot imaging how todays IT professionals can get the same level of visibility in highly distributed hybrid-cloud environments as we had so long ago. Adopting a cloud strategy in many ways is a pre-requisite to IoT. However, along with concerns about security and vendor lock-in, lack of visibility into system operations is a major concern among IT organizations when making the inevitable move toward introducing cloud computing into their enterprise architecture.

I recently stumbled upon a company called ScienceLogic that might just have this problem licked. The ScienceLogic platform discovers all IT elements—whether in the cloud, or on-premises, providing a holistic view of your entire enterprise in one place. The co-founder and CEO comes from the service provider industry and held senior management positions within IBM’s Software Division. The CTO and other members of the senior management team come from the telco industry where high availability is an absolute must. In short, these guys have been around long enough to truly understand the problem.  Alliances with companies such as VMware, NetApp, Intel, and Cisco indicates they have visibility into platforms that are well established in the enterprise IT market. What is unique is that they also have formed deep partnerships with Amazon Web Services (AWS), Microsoft, and other major cloud providers and have similar access into processes running outside of their own four walls. What this means is enterprise IT professionals can now have full visibility at a granular level across on-premise and multi-cloud environments. This is VERY cool.

One of the major advantages of cloud computing is the dynamic nature of the resource. Historically IT would site down with their corporate business units, prioritize projects and hammer out a budget, meet with vendors, buy stuff, etc. In the cloud world If you need more computing power you just fire up a few more instances and away you go. Going back and shutting down resources that are no longer needed is often forgotten until the bill arrives. As cloud computing moves deeper into the enterprise business units have more autonomy than ever and for many “Shadow IT” is a way of life. Regardless of how the money changes hands it all rolls up into the corporate IT budget. Management tools that can providing visibility across both internal and external computing environments and help enterprises manage their IT budgets will become increasingly popular as hybrid-cloud architectures become the norm.

In simple terms Enterprise IoT is little more than distributed computing on a massive scale. It took several years for the enterprise to adopt web-based architectures in the early 2000’s and this will be no different. However, in an admittedly overhyped world of inflated expectations it is refreshing to see a real solution that addresses an identified market need.  It’s worth noting that Intel Capital led a $15 million investment round in ScienceLogic in 2012 and Goldman Sachs led a $43 million round earlier this year – as a fan apparently I am in good company.

If the early money in Enterprise IoT will be in the picks and shovels of infrastructure, as I believe it will, then companies like ScienceLogic might just be the foundry. If you are contemplating (or already struggling with) a cloud migration you may want to give these guys a look…they are really on to something.